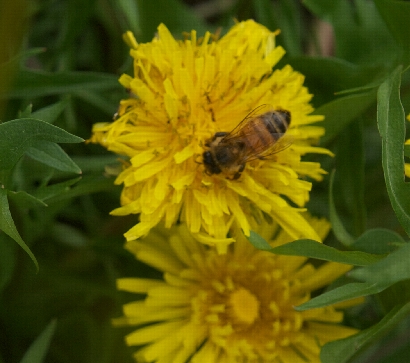 Some of you may know that we have a backyard bee hive and we love our bees. We can see the bees from the back sitting area and they are busy from dawn to dusk! We talk to them every day and I even sing to them. Well, they sing- or at least hum- to us too! :)

In these days of superbugs and and antibiotic resistance, honey’s healing qualities are becoming more recognised again- in fact, they have only been forgotten for the last 50 years as antibiotics became the norm- but we are rapidly losing the ability to rely on the effectiveness of antibiotics. Honey has been used both internally and externally for healing for thousands of years, and it is as effective now as it has always been.

Worldwide studies have shown that honey is a remarkable wound healer- wounds, ulcers and burns treated with honey heal quicker, they smell less and scarring is less. In one study, honey was compared to the commonly used silver sulfadiazine in 104 1st degree burn patients. After a week, 91% of the honey treated burns were infection free compared to only 7% of the silver sulfadiazine treated burns.

Honey is now being used successfully in nursing homes and hospitals when nothing else has worked, such as in diabetic leg ulcers, even where amputation is imminent. Gangrene, fungal infections, post-surgical wound infections, burns, dental plaque and stomach ulcers can also all be treated effectively with honey. Honey is active against many bacteria such as staphlycoccus aureus, streptococcus, rubella, salmonella, candida...many others. Of course, work with your qualified health practitioner for more serious conditions- but sometimes, simple is best.

But, who will make money from giving you honey when you ask for help from your doctor or pharmacist? Of course, a medical grade honey has now been produced (someone had to do it!), but any organic wildflower honey where the bees had access to a range of flowers can be effective in anti-biotic resistant skin and wound infections. There are some honeys that are more effective than others- such as Manuka honey from New Zealand and our own West Australian Jarrah honey- but don’t let the expense of them stop you using our wonderfully effective range of other honeys for your skin infections, even quite serious ones. Bees are naturally attracted to medicinal plants and we are lucky here in W.A. to have many wonderful honeys, and they are all antibacterial to various degrees.

Internally, honey can be used for immune stimulation, overall health improvement, and treatment of colds, flus and respiratory infections.

It is no wonder that honey, bees and other bee products such as pollen, propolis and royal jelly have such a rich cultural history. The ancient Egyptions are the first recorded to have kept bees domestically, the Ancient Greeks used honey as a superfood in the Olympic Games, and the famous Roman writer Pliny described a region where people lived to over 100 years old because of their consumption of honey and pollen. It is also documented in Russia that many centenarians acredit their longevity to lavish consumption of honey. Honey has been used as a currency for barter and even to pay taxes.

Did you know that honeybees visit over 2 million flowers to make one 450g jar of honey? That an average worker bee lives only 6 weeks and creates only 1/2 tsp of honey in her life? That all worker bees are female?

Honey is a miraculous and magical food and medicine, and it is full of minerals, enzymes, antioxidants, probiotics and also substances they haven’t named or recognised yet. It is a wonderful wild food, and we tend not to eat enough wild foods. It is convenient, available, nutritious, and with the international decline of bees, which will be catastrophic if it continues, supporting bee keepers is a good idea too. But we are better off having thousands of householders having a single bee hive in their garden than a few apiarists with thousands of bee hives, so if it appeals to you, consider keeping bees. It is a wonderful hobby that keeps you in touch with the wild side, and the rewards are so sweet!

Email ThisBlogThis!Share to TwitterShare to FacebookShare to Pinterest
Labels: Bees and Honey